For generations, mankind has looked to the night skies with awe and wonder at the majesty of the heavenly bodies. Few have taken the curious step towards getting a close look at these planets and stars. Before, only the finest astrological institute would offer you a scientific look through a telescope. Today, you can be your own astronomer during a clear night sky. But which telescope would be enough for the starting stargazer?

Page Contents show
Telescopes For Astronomy
All About The Aperture
Does Magnification Matter?
After Aperture, What’s Next?
Stability Is Key
Two Different mount types:
Some Last Notes

At some point you might have seen some toy telescopes displayed in stores and they might actually look good enough for some basic gazing at the heavens. But if you are really considering going a step further into amateur astronomy then it makes a lot of sense to get something that does the job even as you advance in your planetary viewing. The last thing you would want is spending money, albeit not quite a lot yet, and getting frustrated with the subpar performance of your purchase.

Any telescope user with some good experience would tell you directly that to start understanding telescope quality you look at the aperture.

All About The Aperture

You might have heard this word in photography before but in telescope anatomy instead of referring to an opening for light to enter, it refers to the circular light-gathering lens or mirror and is also often called the objective. If you want to know a telescope’s aperture diameter or size check out the details near the focuser or possibly at the front of the tube. The box of your telescope also shows this detail. Aperture size will be expressed in millimeters (just as you would with camera lens ranges) or possibly in inches which is not very common.

What size of aperture would be best for starters? You should at least have seventy millimeters of aperture diameter but if you can get more, then that would be even better.

A larger aperture allows for more detail and better visuals of faint objects in the sky. This works especially well if you are dealing with a sky that is competing with light pollution from your city. So in different environments your performance for even a simple scope can be similar to that of one with greater aperture if you are viewing from a dark zone where there are no city lights or competing light sources around. This is where a larger aperture can also give you even more detail when used in an optimal nighttime setting.

To a common person you might think that getting a closer look is all about magnifying your view. And that is why you will tend to see some product boxes really carrying a loud label on how much magnification their telescope can do. Now you just need to remember that a telescope’s max useful magnification is at least fifty times its aperture in inches. So at the end of the day you will still go back to looking at the aperture diameter for clarity.

After Aperture, What’s Next?

It may seem simple enough to just decide on a telescope based on aperture. But you need to know as well the difference between the three kinds of telescopes so that you can choose which one works better for you in terms of size, performance, and budget.

These three telescope types will all fulfill the same objective of increasing the visual size of distant objects as well as making them brighter than what we normally see with our own naked eye.

Even though apertures and focal lengths provide for a great visual, the full experience of looking at the heavenly bodies, require a rather under-appreciated feature: stability. Even if you have a telescope that can view all the way through several galaxies, it becomes frustrating if your telescope positioning gets easily nudged or you struggle with pointing to your desired frame.
Again we can relate it to photography when choosing the mounts that effectively help you with your scope’s direction.

Altazimuth Mount Sometimes called alt-az, this is the most common type of mount that simply swings horizontally and vertically just like you would on a normal tripod mount. “Alt” refers to altitude which is the vertical motion. “Az’ refers to azimuth which is the horizontal movement. If you invest in a higher-end altazimuth mount you can have one that is computer-driven for greater accuracy.

You might also hear about the Dobsonian mount which is mounted on the ground using a massive platform. This is a new kind of altazimuth mount and was designed to be used for huge telescopes.

Equatorial Mount These types of mounts are definitely more superior than the manual altazimuth mounts with no computerized manipulation. If you are looking into astrophotography or even just long periods of observation then this mount provides for a good support and guide. Because the earth rotates around an axis, the heavenly bodies would seem to move across the night sky. Using an Altazimuth Mount that is not programmed, you will quickly see those stars leave the view of your telescope. The equatorial mount can follow those celestial movements through a manual control of the mount or through an electric motor.

Just remember, with any mount that you choose check for stability. You want to be able to consider small details like the paddings on the legs and how well their legs stand on different surfaces. Some are made to easily adjust on uneven surfaces while others might not operate as smoothly.

If you decide that you want a particular mount brand that is different from the mount that comes with your telescope of choice, check with your supplier if there is no compatibility issue. There are some scopes that do not come with a ready mount and you can then buy your own preferred mount for it.

Should you be traveling a lot and bringing your telescope around, make sure a good carrying case comes with it. You are dealing with some precision instruments therefore a good protective casing will be necessary.

Our team has considered all the factors outlined in this buying guide, along with their expertise and knowledge in Telescopes, to recommend the top choice for you. You can shop being confident that someone has considered all relevant information and you will get the best Telescope to meet your needs. Happy shopping! 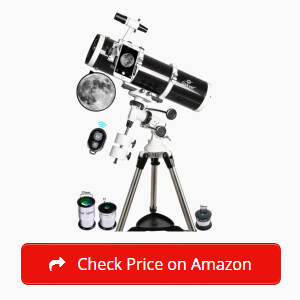 Telescopes For Astronomy
All About The Aperture
Does Magnification Matter?
After Aperture, What’s Next?
Stability Is Key
Two Different mount types:
Some Last Notes